New rules on fireworks crackers in Gujarat, if you do not know or regret 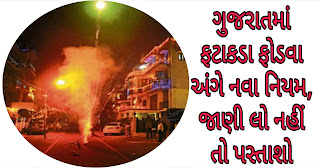 Police Commissioner RB Brahmabhata has issued a notification banning the spread of fireworks, liquor from 10am to 6pm in the entire area under the control of the Surat city police commissioner.  Besides, banning the burning of bombs, rockets, aerial and other firecrackers on public roads, roads, pavement, fireworks, fireworks, burning and fireworks.

In the notification, firecrackers have fired firecrackers, flying over air, rockets or sky-flames, within a 100-meter area of ​​hospitals, schools, colleges, educational institutions, over fireworks, and over the wall around the Surat airport.
Read in Gujrati:Clik here
No one can fly ammunition, rockets, or firecrackers flying across the sky, even in the enclosures of companies of industrial units within the boundaries of the Haira and Wishpur police stations.