Ration Card Service Will Be Available In Villages @Ration Card Gujarat: Ration cards are an official document issued by state governments in India to households that are eligible to purchase subsidized food grain from the Public Distribution System (under the National Food Security Act). They also serve as a common form of identification for many Indians. 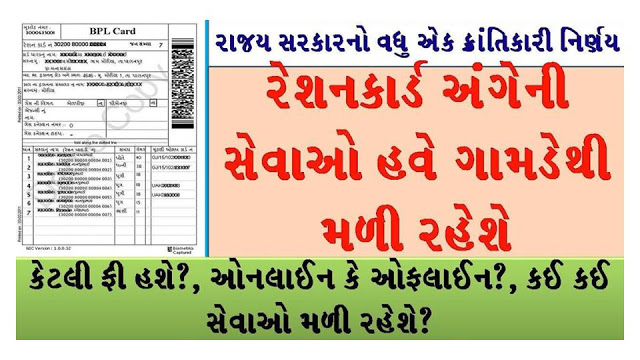 Aadhaar-enabled beneficiary:
The bank accounts and ration cards of eligible beneficiaries are linked to their Aadhaar numbers. A bank account can be enabled as AeBA by seeding (linking) it with an Aadhaar number. Seeding makes mapping information stored on the NPCI payment gateway that facilitates the subsidy payment. Seeding helps identify genuine and eligible beneficiaries and prevents duplicate and non-existent persons from registering. Users can link a bank account as a self-service option through ATM kiosks, the Internet, bank websites, telephone, or by providing a copy of the Aadhaar letter to a bank.

e-Ration Card Services:
With the help of e-Ration service, applicants can obtain ration cards and check their costs and food grain availability online. This will help end the corrupt practice of holding back rations and ensure cards reach the needy. Aadhaar cardholders can apply for e-ration cards. The Department of Food Supplies and Consumer Affairs website provides eligibility details for the food security plan. This service was first introduced in Delhi. Later this has been followed by the state Govt of Tamil Nadu.

Watch Ration Card Service Will Be Available In Villages

New Ration Card In Gujarat On Digital Gujarat gov in