All shops can be opened from tomorrow: Gujarat government announces

Gujarat Chief Minister Vijaybhai Rupani has taken an important decision for small and big shopkeepers and businessmen of the state. In all the districts of the state on Sunday. From April 26, all shops except malls and marketing complexes will be allowed to start their own businesses. Following the announcement of the Government of India, the Chief Minister has announced this decision in the state. Concessions for doing business are subject to terms and conditions. Accordingly, the area in which the shop-business is permitted for business should be outside the containment area. 50% of the regular staff of the shop-business will have to keep the staff. Wearing masks and maintaining social distance will also be mandatory for shopkeepers. 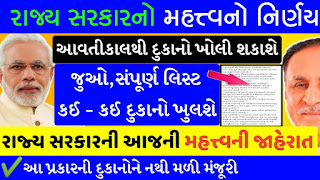 Government of India.
Such concessions are subject to the Terms and Conditions.
Accordingly, the area in which the shop-business is permitted for business should be outside the containment area. 50% of the regular staff of the shop-business will have to keep the staff.
Wearing masks and maintaining social distance will also be mandatory for shopkeepers.
Containment areas declared by the local authority will be considered valid.
In view of the Corona virus, the government has extended the scope of relief in lockdowns implemented across the country. Now, apart from the shops attached to the essentials, the shops of non-essential items can also be opened with conditions. So will every neighborhood store open now? A new order from the Union Home Ministry on Saturday morning has left shopkeepers confused as well as the general public. In fact, the words used in the government's instruction added to the confusion. Let us understand in simple language what this order of the government means and where the shops will open and where they will not.

Which shops will open?
Only shops registered under the Shops and Establishments Act in all the states and union territories of the country can be started from today. As per the order issued by the Home Ministry, the Central Government has allowed the opening of shops in residential areas falling within the limits of Municipal Corporations and Municipalities.
Registered markets outside the boundaries of Municipal Corporations and Municipalities will also be open from today. However, only 50 per cent of the employees will be able to work in the shop. The mask will be mandatory for everyone and will also maintain social distance.
Salons and beauty parlors will also be able to open in the non-hotspot area from today as per the Home Ministry order. In which it will be mandatory to follow social distance and wear a mask.

Even in rural and semi-rural areas, all shops can be opened with the conditions of the Ministry of Home Affairs.
These services will be banned
Shops will not be allowed in multibrand and single brand malls outside the boundaries of Municipal Corporations and Municipalities.
Cinema hall, mall, shopping complex, gym, sports complex, swimming pool, entertainment park, bar, assembly hall and auditorium will be closed.
It will be mandatory to comply with these conditions
Only 50 percent of the staff will be able to work.
It is mandatory for everyone who works to wear a mask.
Everyone has to follow social distance.
Shops will not be allowed in Corona's hotspot and containment zone.
What is a command
The Union Home Ministry has amended its order issued on April 15 under the Disaster Management Act 2005. Under the change, non-essential goods shops are now allowed to open with certain conditions.

The shop will not open in the hotspot
Unnecessary goods shops will not be able to open in hotspots and containment zones yet. In Corona virus hotspots, relaxation of lockdown rules from the center will not apply. It can be understood in this way. Following such complications in the wake of the relief order in the lockdown, it was clarified by the Gautam Buddha administration that no concessions would be given in hotspots. Noida Sector 22 is a Kovid-19 hotspot, so the new rules of the Center will not apply there.
Only registered shops will open, not without registration
The Home Ministry order clearly states that only shops and shops registered under the Establishment Act are allowed to open in different states. Shops which are not registered under this Act in the respective state will not open. In fact, to start any small shop, it is necessary to register. This registration is done under the MSME Act 2006 or the Shop Act in the concerned municipality.
States are free to make their own decisions there

CAT National General Secretary Praveen Khandelwal clarified the situation regarding the confusion among traders across the country over the order to open shops on Friday night. "Now we all have to wait for the decision of the state government," he said. In fact, different states may have their own rules for opening shops depending on the state of the infection.